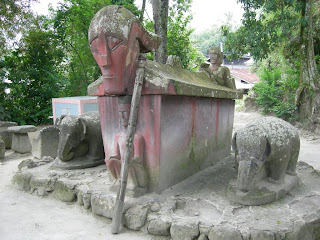 Tomok is a famous location listed in many tourist guidebooks in Asia and . After tourists arrive at the gateway of Polonia airport in or Belawan harbour, they can continue on up to and Tomok on Samosir island.

It is a famous tourist attraction with King Sidabutar's sold tombs. Tomok was the seat of King Sidabutar's power. These tombs were made from carving stone for hundreds of years. They are visited by many tourists every day. 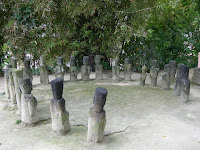 According to the tourism guide, the land around Tomok was taken under control by King Sidabutar, his officials and heirs many years ago. Because he was a wise king he was able to motivate his people to work daily and to uphold the natural sacred values of the three principles (Dalihan Natolu) as a general cultural philosophy of the Batak people.

When King Ompu Soribuntu died, all his people were present to give and take the culture based on the three principles. Then the king was not buried in the ground but in the tomb carved out of the stone in the centre of the . 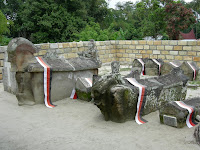 Then for many years this area controlled by King Ompu Ni Ujung Barita Sidabutar who was also a wise king and able to continue the traditions and culture of Dalihan Natolu (the three principles) which had been established by King Ompu Soribuntu Sidabutar. When King Ompu Ni Ujung Barita became old, he decided to find a partner. He became engaged to a beautiful and gentle lady named Anting Malela Boru Sinaga. The engagement went properly.

As a sign for an engaged woman in Batak culture, everywhere she went she had to carry a white cup without handles over her head. Then everyone who looked at her would know that she was engaged. It was also meant to discourage other men from approaching her because Anting Malela was really beautiful. She was the most beautiful woman in Tomok at that time.

Time passed by, the wedding day had been determined. All people in this village knew about it. But unfortunately, Anting Malela broke the promise without any reason and did not want to get married with King Ompu Ni Ujung Barita. His feeling were hurt and he felt ashamed in front of his people.

The king became angry. He tried to make Anting Malela disappear her from this earth. Then he decided 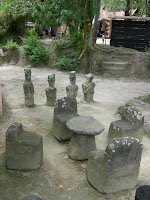 that it was no use for him to try to marry her. The King wanted to kill her by using black magic called 'Dorma Sijunde'. Then if the black magic was successful it attacked the victim. She would not die but would become crazy and would be insulted and expelled by society everyday.

Anting Malela got the 'Darma Sijunde' and she became crazy. Though she had a nice figure and was beautiful she was always insulted and avoided by everyone. For several years Anting Malela became crazier and then one day she disappeared. Nobody knew where she had gone. Some people said that she had gone to the middle of the wild forest.

The King lived alone without a wife and when he died he was buried on the right side of King Ompu Soribuntu. Then after seven days the Hariara trees were planted on his tomb and they grew rapidly and thickly. We can still see these trees. The King's tomb was carved in a such away that you can see the front part of the face of King Ompu Soribuntu Sidabutar wearing head gear like a turban which was a sign of Batak peoples' beliefs.

The same thing had been done to King Ompu Sonbuntu Sidabutar' s tomb. Behind the tomb was Anting Malela sculpture was carved sitting and carrying a cup (without handles) over her head to remind people not to behave like she had. 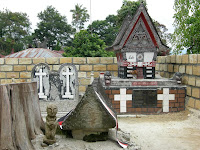 Then Tomok' s kingdom was continued by King Ompu Solompoan Sidabutar. He could lead his people all his life peacefully based on the three principles.

When the King died he was buried on the right side of king Ompu Ni Ujung Barita Sidabutar's tomb. He was not buried in the stone tomb but in the ground. The sign of a cross was placed over his grave. If we visit King Sidabutar's tombs, we will see several tombs including some smaller ones. All these tombs were King Sidabutar's which have been collected so many years ago through cultural ceremonies.