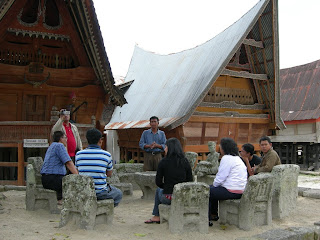 King Siallagan's tomb is famous as a symbol of a great gateway. Tomok is famous for its tourist market and for the stone chairs of King Siallagan. Each of these tourist attractions has a historical and cultural story behind them.
These attractions are about 3 km from Tomok by boat or land using public transportation. According to the story of the guides who give information about these tourist attractions the stone chairs were left by King Siallagan, who was the first man who discovered Siallagan, took control over it and opened it to outsiders. 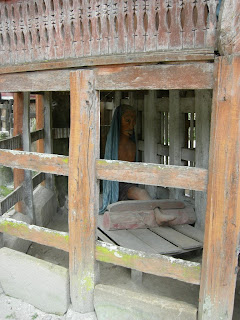 The stone chairs were put in the middle of a park. The houses in the village were surrounded by stone walls about 1.5 metres high. Visitors must enter the village through a small gate which has a stone statue standing nearby which represents King Siallagan taking control over his people and especially bringing justice to the criminals in that village.
According to the local people if someone got caught committing crimes such as stealing, cheating, torturing and murdering he would be taken to the king and the tribal leaders.
The king would look into the matter and decide what the punishment should be. One form of capital punishment was to place the criminal in stocks or to have him be headed. A death sentence had a very strict rule. 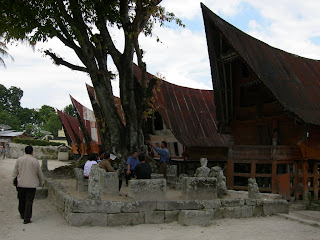 First, they determined the execution date. The criminal, then, was put in stocks in a cage under the king's house as a prisoner. On the day decided, under the watch of the local leaders, the prisoner was taken out from the stocks and brought to the place of execution.
He was given an opportunity to say his last words or ask for the food that he liked most (usually some particular Batak food such as 'Naniura' (sour raw fish), Natinombur (grilled fish with lots of spices), Lomok-lomok (young pig cooked in blood), or Nani Arsik (boiled fish with spices).
At the execution place there were some stone chairs and a large stone table where the prisoner was placed.
Before the execution, the executioner would test the prisoner by cutting his body a little bit to see if he had magic power. If he bled, it meant that he had no magic power and the execution could take place immediately. If he did not, it meant that he had magic power.
This meant that the executioner would have to say special spells to remove it. Then the executioner would scrape the cutter on the ground. Usually after this was done the magic power of the prisoner would be gone. The execution could continue with only one chop.
After that, the body was thrown away in a ravine near Lake Toba. That is the unique story about King Siallagan's Stone chair which has become a popular tourist attraction.